The pen and tablet have turned the PC into a convenient tool for those creative personalities whose elements are visual images. Combining the centuries-old experience of mankind to keep a pen (pencil or brush) and high technologies, Wacom has created products that blur the line between the real and digital worlds.

Everything changes in this age of change

If you are interested in the situation in the tablet industry, then, for sure, remember that Wacom had two lines, differing in functionality and, accordingly, in positioning.

Since autumn the situation has changed. The name Bamboo is now used mainly for products targeted at tablet computers (these are numerous capacitive styluses and applications). There are also “touch-ups”, more suitable for PC control and handwriting text input.

The name Intuos combined almost all the tablets (except for those equipped with their own touch screen, they still belong to the Cintiq family), for professional solutions, the Pro additive is used that does not allow multiple interpretations. 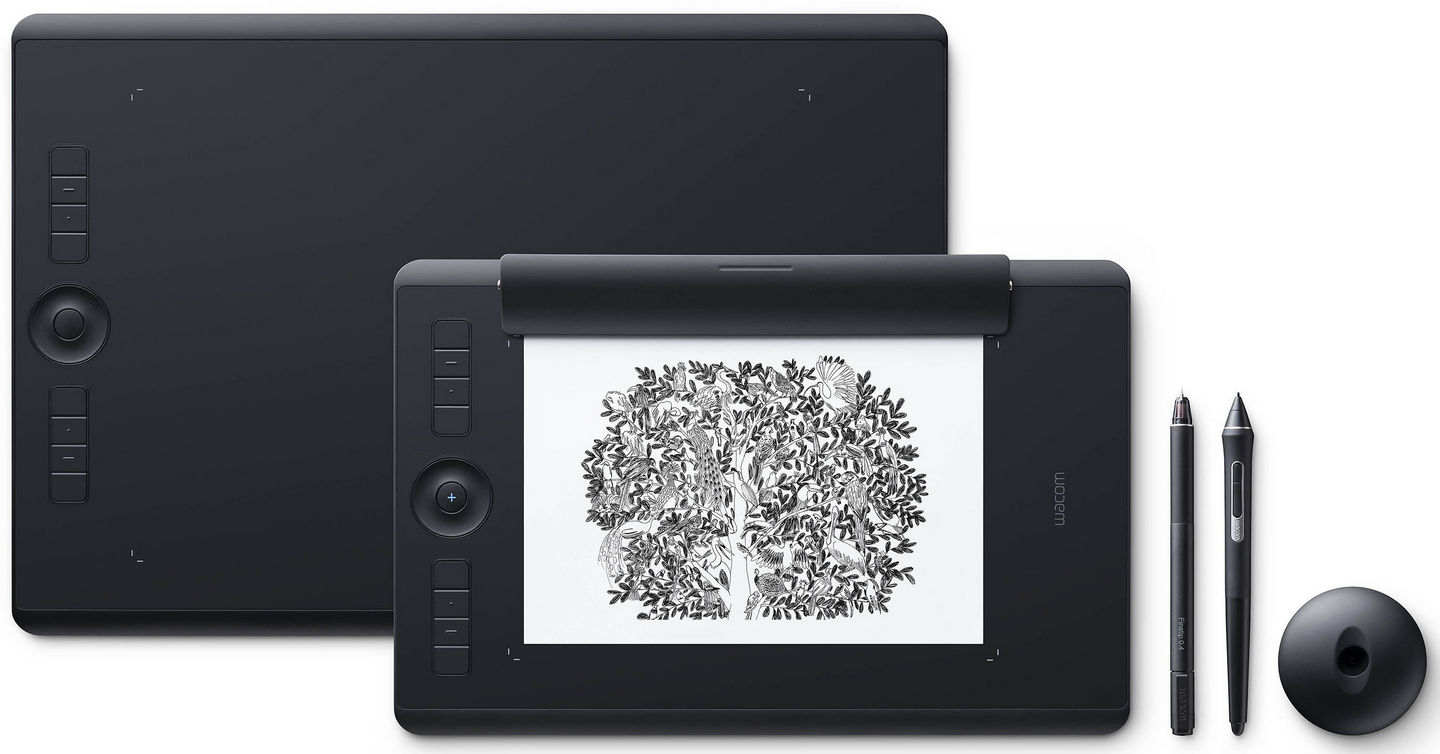 Intuos: which tablet do you need?

Since handwriting information has not yet received any serious distribution, the tablets are used for editing photos and creating digital illustrations / 3D models.

Theoretically, to work with a photo editor, a simple device that distinguishes the force of pressing is sufficient (usually this is regulated by the density of the “paint” applied to the mask or image or the size of the “brush”). And beginning retouchers instead of exercises with a mouse can learn the basics of crafts with Intuos Pen.

A more advanced version is Intuos Pen & Touch. In her there is already an eraser, and the tablet itself recognizes and touches fingers, and several (well, gestures, without them nowhere anywhere).

The body of the tablet is made of silver or black plastic, it is thin and suspiciously light. Above the active area there are four buttons whose functions depend on the application being used and are assigned in the driver.

A loop of a ribbon on the upper edge of the body – the pen holder. By the way, in the set of their two – colorful, to emphasize their own individuality.

The force of pressing allows you to control the thickness or density of a stroke, but not its shape. This is the main difference between the usual Intuos from Intuos Pro.

Professional models, in addition to the force of pressing, determine the degree of tilt of the pen relative to the surface of the tablet, and this makes it possible to simulate the geometry of the stroke. In retouching, almost no role, but for serious drawing / painting – almost necessary.

Naturally, professionally-oriented models are more precise (higher resolution and more degrees of sensitivity). And they are designed for more intensive use, their bodies are stiffer, and the working surface is not so scratched by the tip.

Intuos Pro. What is the difference from the previous version?

It is difficult to perfect the ideal. But you can. Wacom has long provided such outstanding characteristics of its tablets that further technological progress has lost practical meaning.

The resolution of 5080 lpi (lines per inch) is more than enough to work, especially considering the possibility of scaling. 2048 degrees of depression is enough to simulate a variety of instruments, well, maybe except for large soft brushes like fude for Japanese calligraphy.

What’s next? Ergonomics. And also – the complete set of delivery. This is what distinguishes the new Intuos Pro from Intuos 5.

There are three sizes available: small (working area 157 x 98 mm), medium (224 x 140 mm) and large (325 x 203 mm). There is also a Special Edition of the most popular, average, version. The only difference is the silver stripes from above and from below, the design method is inspired by classic film cameras from the last century.

The active area is located far enough from the edge of the body, it is convenient to draw at its borders – the hand lies on the bar and there is a fulcrum.

Wacom tablets are designed in such a way that they can use both right-handed and left-handed. It is enough to turn the device 180 °. The idea is brilliant in its simplicity. For its implementation, it was necessary to observe the equality of the dimensions of the opposing elements that frame the working surface and make a symmetrical set of control elements.

As in the previous version, eight buttons are available to the user, two on the top and the bottom are marked with different protruding parts – this is very convenient for working “blindly”.

There is also a “control wheel” with an active central area, without moving parts. It uses touch technology and tracks the position / movement of the finger.

In Intuos 5, the controls were completely covered with soft-touch plastic – the gap between the button and the body covered the membrane. In Intuos Pro, developers returned to the usual buttons: maybe it looks not so stylish, but it’s easier to press.

Hardware buttons – ExpressKeys – can be assigned to keyboard shortcuts. Thus, for each application, eight shortcut buttons for a function or a menu / toolbar are created for the tool parameters, etc. The driver automatically substitutes the desired value when working in the corresponding program.

Wacom engineers refused to display the buttons in Intuos 5, transferring the visual connection with the person on the computer screen – absolutely correct solution, since most users at work look at the monitor, rather than on the tablet.

When you click on the buttons, a semi-transparent panel appears with a hint that it is assigned to one or another control.

Multifunctional is the “wheel”. The button within it sequentially switches four (also assigned via the driver and application-specific) functions, while one of the four LEDs lights up on the tablet.

However, that’s not all. The driver allows you to create a so-called. a circular menu – a translucent panel on the screen, called by one of the hardware buttons. Eight sectors of the circle can be assigned commands / keyboard combinations that will be worked out when pointing at them with the cursor and pressing the tablet.

After spending some time in thoughtful setting, an artist or a retoucher can create for himself a comfortable set of control elements, which will allow you to access the keyboard only in the rarest of cases, and therefore, literally avoid unnecessary movements.

Pro-versions are equipped with a universal pen with an eraser, a rocker for two positions under the index finger and interchangeable tips. For operation, neither a battery inside nor wires to the tablet body is required.

In the driver, you can very fine-tune the parameters of the pen – assigning buttons, sensitivity to pressing, etc.

To retouch photos, the material of the tip does not matter, the main thing is comfortable moving over the surface.

It’s a different matter when drawing. Of course, there cannot be a complete analogy, but the difference between “felt-tip pen” and “pencil” is felt well.

Replaceable tips (this is an expendable material, they wear out friction and are sold separately) are hidden in a desk stand for the pen. It is designed in such a way that the pen can either be put or put (almost like an ink tank). 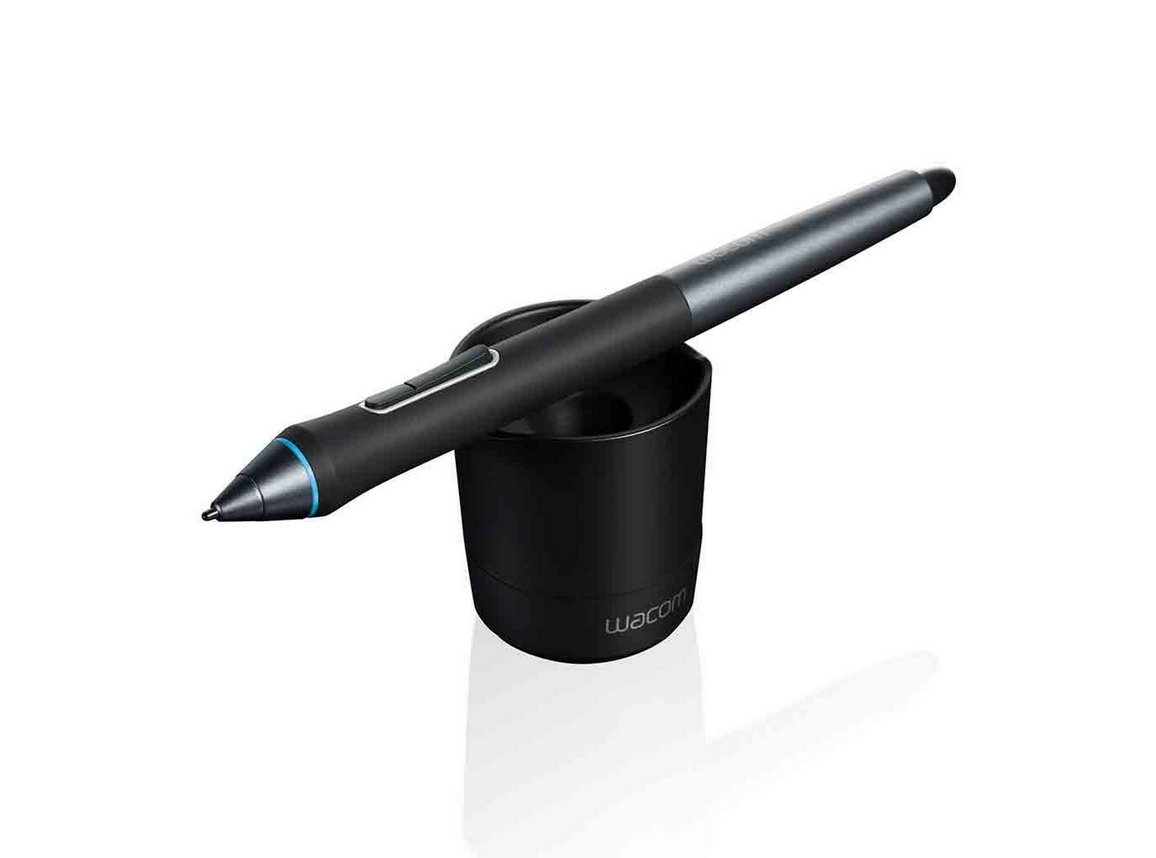 In the arsenal of Wacom there is an Art Pen – feather, imitating a felt-tip pen with an angled rod. The tablet recognizes the rotation of this pen around its axis and communicates this information to the application.

Wacom tablets support the Tool Id technology. The point is that each pen (and there is also a digital airbrush) has its own unique number, and the system is able not only to recognize which tool was brought to the active surface, but also to change the result of its application, depending on the settings.

In practice, this means that by purchasing a couple more feathers or an airbrush, you cannot switch instruments through the menu, but physically change them like real ones.

Although the tablets are equipped with USB cables (of sufficient length and with a thoughtful design of the connector), it is more convenient to work through the wireless interface. In Intuos 5, it was a separately purchased accessory, and now – part of the standard package.

Undoubtedly, this is a major improvement compared to Intuos 5, because the victim was given the opportunity to install one of three programs for working with images: the versions were not trial, but special, i.e. with less functionality.

Wacom offers its own solution, standard wireless interfaces of the computer are not used. To connect, you need to install the transmitting module and the battery in the tablet, and the receiver into the USB connector on the computer. The battery is charged via USB inside the tablet. 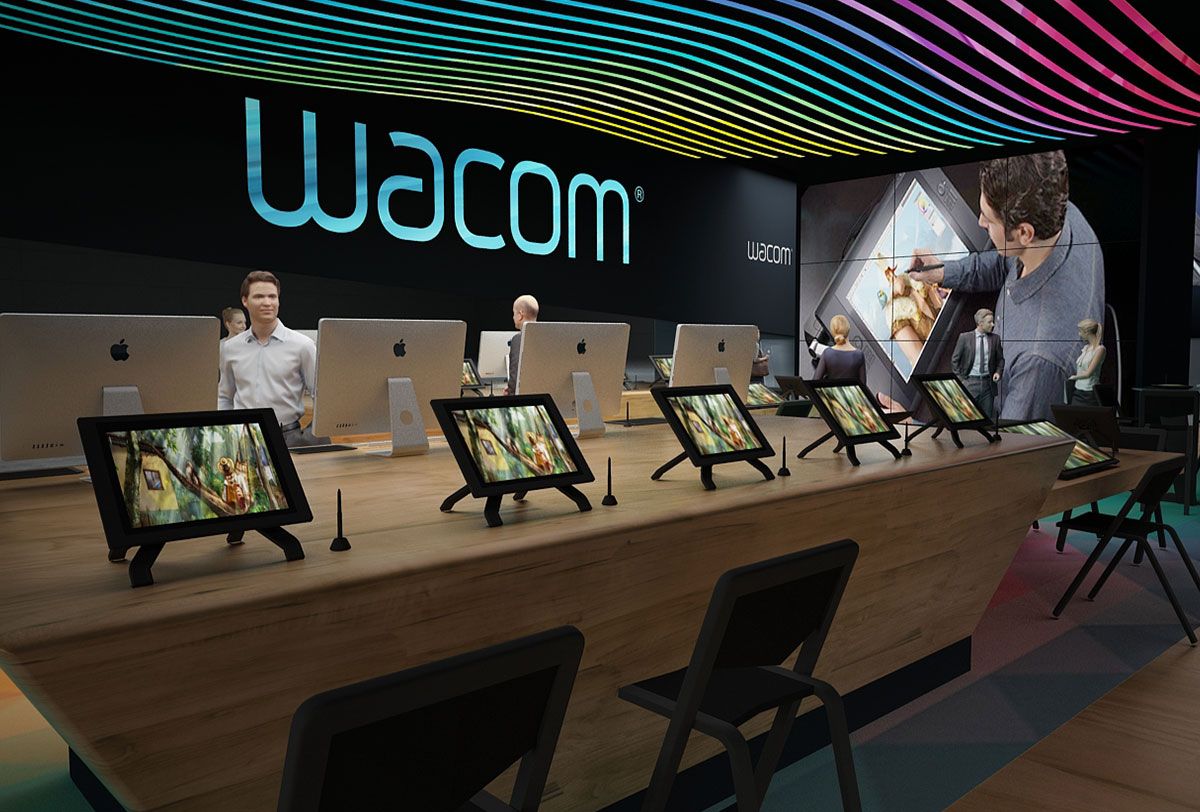 Prospects. How can anything change?

Ironically, this sounds, but the driving force behind the development of the tools market for creative work has recently become Microsoft. Focused on touch control, Windows 8 has driven manufacturers to release computers with touch-sensitive displays. This is still a novelty, and in a few years a situation is quite possible in which a conventional, non-touch screen becomes a rarity.

Wacom has begun experiments to create a pen that works with a capacitive touch screen and can transmit information about the force of pressing and tilting the computer.